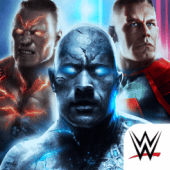 We provide WWE Immortals 2.6.3 APK file for PC (Windows 7,8,10).
WWE Immortals is a free Action game.
Our Site helps you to install any apps or games available on Google Play Store. You can download apps to desktop of your PC with Windows 7,8,10 OS, Mac OS, Chrome OS or even Ubuntu OS.Also you can download apk files for your phones and tablets (Samsung, Sony, HTC, LG, Blackberry, Nokia, Windows Phone and other brands such as Oppo, Xiaomi, HKphone, Skye, Huawei…).
Please be aware that We only share the original and free pure apk installer for WWE Immortals 2.6.3 APK without any modifications.

The average rating is 4.35 out of 5 stars on playstore.
If you want to know more about WWE Immortals then you may visit Warner Bros. International Enterprises support center for more information

All the apps & games here are for home or personal use only. If any apk download infringes your copyright,
please contact us. WWE Immortals is the property and trademark from the developer Warner Bros. International Enterprises.

Take your favorite WWE Superstars out of the ring and into the supernatural world of WWE IMMORTALS. Wield DEVASTATING POWERS to demolish opponents with innovative touch-based combat from the makers of Injustice and Mortal Kombat. SUPERCHARGE YOUR ROSTER with spectacular signature moves, gear and support cards. Bring the pain during live BONE-CRUNCHING BATTLES tied to WWE events.

FIGHT
Use the touch screen mechanics of your mobile device to do epic battle with your enemies in 3-on-3 combat. Swipe and tap to perform combos and build your power to pull off special attacks and use each Superstars’s customized superpower.

LEVEL UP
Build your move set, increase your powers, upgrade your characters, and conquer your competition. Constantly evolve your roster to fit your style of play and put your best Immortals forward as you take on a series of combatants.

ONLINE MULTIPLAYER
Take on real opponents in Online Battles and compete against players around the world in live, in-game events tied to the WWE and earn awesome rewards.

AMAZING GRAPHICS
Delivers best-in-class graphics on your phone or tablet, with custom animations for every single WWE Superstar. Engage in battle across multiple worlds, all tailored for each Superstar’s alter-ego, fully rendered in 3D.

How to Play WWE Immortals App on PC,Windows