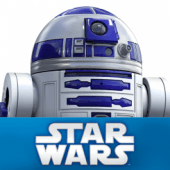 We provide Smart R2-D2 1.22 APK file for PC (Windows 7,8,10).
Smart R2-D2 is a free Entertainment app.
Our Site helps you to install any apps or games available on Google Play Store. You can download apps to desktop of your PC with Windows 7,8,10 OS, Mac OS, Chrome OS or even Ubuntu OS.Also you can download apk files for your phones and tablets (Samsung, Sony, HTC, LG, Blackberry, Nokia, Windows Phone and other brands such as Oppo, Xiaomi, HKphone, Skye, Huawei…).
Please be aware that We only share the original and free pure apk installer for Smart R2-D2 1.22 APK without any modifications.

The average rating is 4.22 out of 5 stars on playstore.
If you want to know more about Smart R2-D2 then you may visit Hasbro Inc. support center for more information

All the apps & games here are for home or personal use only. If any apk download infringes your copyright,
please contact us. Smart R2-D2 is the property and trademark from the developer Hasbro Inc..

TEAM UP WITH YOUR SMART R2-D2™ TO COMPLETE INTERGALACTIC MISSIONS AND REVEAL THE CAPTURED DEATH STAR PLANS WITH THE HASBRO SMART R2-D2™ APP!

• Launch the Hasbro Smart R2-D2™ app to control Smart R2-D2™. Use the app to make R2-D2 react and move, and to change lights and sound effects.
• Open the Programming interface within the Smart R2-D2™ app to access programming blocks that will let you create programming sequences. Save those sequences within the app, and use them to complete in-App missions.
• Use the Preview feature to digitally test your program sequence.
• Use the Send to Toy button to send your program sequences to the Smart R2-D2™ toy and watch the droid complete the programmed directive.
• Select Missions to complete programming challenges. In order to fully complete Missions, the app must be connected to the Smart R2-D2™ toy.
• Complete missions to unlock individual components of the Death Star plans.
• Successfully complete all the missions to unlock the complete plans for the Death Star and save the galaxy!

• A remote control for your Smart R2-D2™ toy
• Make R2-D2 interact with your favorite Star Wars characters including Rey, Finn, and more!
• Practice problem-solving by using drag-and-drop code blocks to complete exercises and missions with your R2-D2
• Complete coding missions to unlock the Death Star plans and save the galaxy
• Programing interface that allows you to program your R2-D2 to move, react, light up, play sound effects and other fun features.

Check www.starwars.hasbro.com for compatibility, availability, and instructions. Make sure your device supports this app before downloading. Other devices may be compatible but are not supported. Updates affect compatibility.

The Hasbro Smart R2-D2™ R.C. app is free to download and play, but additional in-game items can be unlocked via the following ways:
– By scanning effects codes contained in specially marked Hasbro Star Wars toys; or
– Over time by earning rewards through play.

Hasbro and all related logos are trademarks of Hasbro, Inc. © 2016 Hasbro. All Rights Reserved.

Google Play and Android are trademarks of Google Inc.

How to Play Smart R2-D2 App on PC,Windows