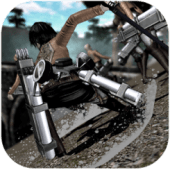 The average rating is 0.00 out of 5 stars on playstore.
If you want to know more about BattleField (Attack On Titan) then you may visit kamasu support center for more information

All the apps & games here are for home or personal use only. If any apk download infringes your copyright,
please contact us. BattleField (Attack On Titan) is the property and trademark from the developer kamasu.

=== Incoming Giant Update! ===
The battlefield has evolved again with our giant April, 2015 update!

Continuing from “Attack on Girl” and “Attack to Conquer 3D,” the 3rd and last installment in the Attack On Titan games is here.
The high-quality 3DCG has improved from past installments, and players around the world can battle together through the network.

* Online Simultaneous Collaborative Play
Now, friends and players around the world can enjoy playing together through the network’s online play feature, By setting privacy preferences, it is also possible to play only with friends.

* Equipment Customization
Now, equipment can be enhanced and combined by using coins and raw materials acquired on missions.

* Character and Equipment Gotchas
Equipment and characters may be unlocked through “gotchas.”

* Character Skills
Skills can be used after a certain period of time elapses on a mission or requirements are met. Unique skills have been created for each character.

* Quests
This time, with the new “Quests” feature, new stages will be unlocked at certain times. Some quests are only accessible on certain days of the week or weekends.

* Updates
The story in Mission Mode is five chapters long at present, but expansions are planned for future updates. Each update will add on new features and new stages.

– Camera Control
With your right hand, you can drag the screen and rotate the camera.
You can drag it left and right to turn it side to side, and drag up and down to change the camera zoom.

– Running
You can walk and run by dragging the the lower left pad.

– Anchoring
Tap a Wall or a Titan marker once.

– Winding Anchor (Jumping)
Use the lower left pad to move in all directions.

– Cutting Titans at the Nape of the Neck
Hit the weak point marker at the nape of a Titan’s neck with an anchor, sneak around back, and long press the action button.

– Locking On Titans
When you have gotten close enough to a Titan, press the blue button in the lower right of the screen.
When not in lock-on range, the camera will return to its previous viewpoint.

– Using Skills
When enough accumulates in the Skill Gauge in the upper left of the screen, the lower right Skill Button will change from gray to green. When the Skill Button is pushed in that situation, a Skill will be activated.

– Avoiding Titans
When you defenselessly walk in front of a Titan, you will be grabbed by the Titan.

– Rescuing Others from Titans (Online Only)
If another player is seized by a Titan, you can attack the Titan and make it release the other player.

– Rolling
You may roll by pressing the Action Button while running. While rolling you can move at high speed, and become invincible for a short time, but usage is limited because it uses up large quantities of compressed gas.

– Compressed Gas Cylinder Replacement
When a gas cylinder runs out, press the Action Button to change the cylinder.

– Blade Replacement
When a blade breaks, press the Action Button to replace it.

– Saluting
When standing on ground with nothing else on it, you can press the Action Button to salute.

＝＝＝＝＝＝＝＝
This game belongs to the Attack on Titan group, and has absolutely no relation to the original authors or publication companies.
Also, all of the graphics and models used in this game are our own work. All sound effects and music were lent to us by the following sites.
We are extremely grateful to all of the authorized persons who created the wonderful original work and world materials for lending them to us.

How to Play BattleField (Attack On Titan) App on PC,Windows

3.Open Google Play Store and search the BattleField (Attack On Titan) and download,