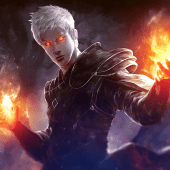 We provide 3D MMO Villagers & Heroes 4.29.6 (r50798) APK + OBB file for PC (Windows 7,8,10).
3D MMO Villagers & Heroes is a free Role Playing game.
Our Site helps you to install any apps or games available on Google Play Store. You can download apps to desktop of your PC with Windows 7,8,10 OS, Mac OS, Chrome OS or even Ubuntu OS.Also you can download apk files for your phones and tablets (Samsung, Sony, HTC, LG, Blackberry, Nokia, Windows Phone and other brands such as Oppo, Xiaomi, HKphone, Skye, Huawei…).
Please be aware that We only share the original and free pure apk installer for 3D MMO Villagers & Heroes 4.29.6 (r50798) APK + OBB without any modifications.

The average rating is 4.30 out of 5 stars on playstore.
If you want to know more about 3D MMO Villagers & Heroes then you may visit Mad Otter Games support center for more information

All the apps & games here are for home or personal use only. If any apk download infringes your copyright,
please contact us. 3D MMO Villagers & Heroes is the property and trademark from the developer Mad Otter Games.

Explore the fantastical Seven Realms with hundreds of thousands of players online from around the world, in this epic MMO in a massive 3D world where mighty battles will be fought, real friendships will be made, and where a rich crafting and gathering system exists unlike that found in any other game!

★ Explore a Massive World with Thousands of Story-Driven Quests
★ Party-up with Friends to Raid the Lairs of Mallok’s Brood of Horrors
★ Forge your own weapons and outfits, enchanting them with exactly the spells and proficiencies you choose
★ Garden, Ranch, Fish, Mine, Collect Bugs, Smith, Tailor, Cook, and Forage
★ Customize your character and Build your skills with hundreds of spells and heroic feats
★ Build the mightiest Village in the Seven Realms
★ Partake in unique Seasonal Event Challenges
★ Play seamlessly between Mobile and PC

Endless Exploration
Step into bejeweled sunsets, or charge into hellish infernos. Face a zombie prince in a shadowy cavern of dangling staircases, or traverse icy mountains with savage winds and eerie magic. With hundreds of zones to choose from, Villagers & Heroes provides a truly vast world, one which offers players an unending palette of spectacularly diverse regions to explore and conquer, and to set their senses tingling in.

Gnomish Augmentation = Sandbox Gameplay
This unique feature is at the heart of the deep yet elegantly simple player choice system in Villagers & Heroes. The weapons and armor that a player equips not only grant a versatile assortment of heroic feats and spells, but also a large array of proficiencies and augmented abilities. The process of Gnogmenting gives the players the ability to mix, match, swap, replace, customize and design gear exactly how they want! Combine ancient elder gear with remarkable weaponry dropped from the monsters of the world. Or craft your own gear using any or all of the 10 gathering and crafting skills available. Gnogmenting is a completely free-form, sandbox system that is unmatched by any other game in its depth, and lets players test every tactic and indulge every creative whim.

Story-Driven Quests and Intriguing Lore
Delve into the lore of V&H! Learn about The Legendary Four – Marat, Celestia, Voltan and Calypso—those valiant heroes and the first of their classes, who came together during the nightmarish Shadow Years and sacrificed their lives to defeat the evil tyrant, Mallok, and his army of monstrosities. Light and prosperity were restored to the land, but foul creatures and twisted beasties still hunger for the darkness of old, and will stop at nothing to reclaim their savage rule of the realms. Challenging quests rife with mystery and danger await!

How to Play 3D MMO Villagers & Heroes App on PC,Windows